Bo. Pastry — new confectionery in the center of Kiev. A place where French culinary techniques meet world classics. This place was created by chef, businessman and TV presenter Hector Jimenez-Bravo. And he dedicated it to one of his hometowns – the Canadian Montreal.

Free delivery of orders from 500 UAH 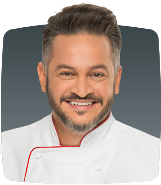 The chef, who knows a lot about combining tastes and techniques from all over the world, was not accidentally attracted to Montreal. This city is able to find balance in things that seem to be inconsistent at first glance. Montreal lives in a subtle harmony between the charm of Paris and the dynamism of the North American metropolis. Quiet streets and French speech are organically combined with cosmopolitan skyscrapers. The same mood reigns in the kitchen Bo. Pastr

A dozen different types of French croissants on the menu are adjacent to the traditional Scandinavian Danish puffs. The American classic is the Red Velvet cake and the cheesecake with the European traditional Napoleon. Even the legendary “Kiev Cake” found a place.

Thanks to another project by Hector Jimenez-Bravo – Culinary & Pastry Arts Academy – at the confectioners Bo. Pastry has the opportunity to personally get acquainted with the latest culinary techniques and learn from the leading chefs of our time. As a result of such cooperation, classic desserts find new readings, and traditional products are revealed in a new way. But no matter how different the recipes and concepts of dishes are, one rule applies to all desserts: the quality of the ingredients and the preparation must be impeccable.

Few people know that Montreal is Hector’s second home. He lived in Canada for more than six years and formed his own gastronomic style Nuevo Latino in the same place. The ability to combine the best manifestations of French, Latin American and Asian cuisine has led the chef to the top league. It is not surprising that Montreal is one of the most important cities for Hector. In addition, many tender memories are associated with him.

We all have “places of power”, to which we sometimes experience irresistible attachment. In bo. Pastry we tried to recreate our own. And give them a taste.